The current tourist season may be "a bit flat" but it's a cyclical business and it will "come back".
That's the view of Michael Toomey, manager of commercial and retail operations at the Royal Flying Doctor Service in Alice.
He believes big picture national and international factors are a much greater influence on the current flattening than specific factors such as the Tiger grounding and negative publicity about the town's social problems.  Violent incidents and anti-social behavior in town get "blown out of all proportion" in the media, says Mr Toomey, and are "insignificant" compared to what happens in the capital cities.
There must be two airlines into Alice Springs and Mr Toomey wants to see the NT Government working on persuading another operator to service the town. But if people were intending to visit, the Tiger grounding would not have been enough to stop them coming, he says.
"It would only be having a small impact, people would find another way to get here," says Mr Toomey.
He sees the greater impacts as coming from the high Australian dollar and the climate of "uncertainty" in relation to national leadership and direction. The attention being given to the carbon tax and its impact on household budgets has people worried and saving, rather than spending.
All this is not enough to deter his organisation from taking the long-term view, and they're putting their money where their mouth is. Mr Toomey says their recently announced $3m redevelopment of the visitor centre will help generate business for the town and the region and hopefully will encourage other operators to invest in their businesses.
Tourism Central Australia's general 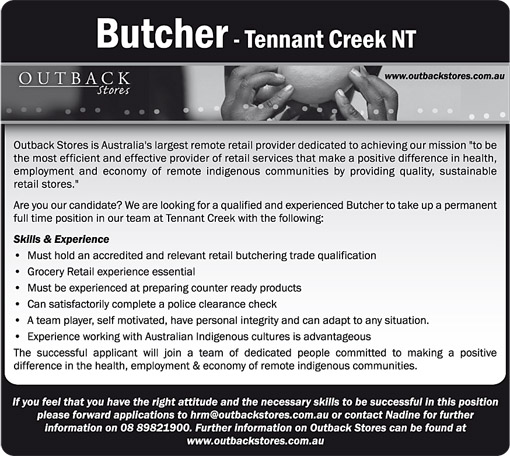 manager, Peter Grigg, also takes a philosophical view: "Tourism is a business activity and like all businesses, tourism businesses will have their peaks and troughs."
But he does hope the current trough will turn into a peak soon.
Businesses can help by "value-adding" to their products, a much better approach than slashing prices, says Mr Grigg.
Value-adding can be a matter of "refreshing" interest, as has happened with the recent change of ownership of Annie's backpacker accommodation and as will certainly happen with the RFDS redevelopment.
Offering more than your competitors will bring the business in, he says. One caravan park, for instance, can offer a powered site at $30 a night; another can offer a powered site and a whole program of activities – a movie night, star-gazing, something for kids – at $40 a night. Mr Grigg's bet is that the second park will get the business.
Deals like "stay four nights, get a fifth night free" are another good strategy for caravan parks. This being said, the region's caravan parks are starting to fill up. Mr Grigg was in Tennant Creek last week and caravans arriving after 4pm were missing out on the sites.
It's clear that the self-drive market, core business for the Centre, started late this year. Easter is always the kick-off point and it came late. There was also an extended wet season. A lot of self-drive visitors intend venturing further north and want to be sure that roads will be passable. He says the Gibb River Road in the Kimberley, for example, opened only a couple of weeks ago.
TCA is looking into how other regions around Australia are faring this season, to help assess whether the downtown the Centre has experienced is similar elsewhere or whether more local factors are at play.  Mr Grigg says the feedback to date is that there is a flattening Australia-wide. Overseas destinations like Vietnam are offering strong competition, and within Australia Lake Eyre is a major drawcard. Mr Grigg hopes that there'll be some flow-on for the Centre from Lake Eyre trips.
TCA is also working to get "good news" stories into "eastern states" media. The association has put out a call to its members for subject mater and employed a writer. While he does not deny that there are "issues" in the town, Mr Grigg does not believe they have fundamentally shaken the Centre's reputation as a "must see" destination.
Gary Fry, director of the Alice Springs Desert Park, is of the same view. He says the park's solicited (through their twice monthly surveys) and unsolicited feedback is "overwhelmingly positive" both about the park and the town. This makes him confident that big picture rather than local factors are behind the current downturn.
He's able to put a precise figure on it – in 2010-11 visitation to the park was 8.4% down on 2009-10 figures, and the decrease was across all the demographic groups of both international and domestic visitors. In raw numbers, some 70,500 visitors came through the gates in 2010-11, with NT residents counting for less than one-fifth.
Going back further, the visitation figures show a distinct downturn in 2007-08, which coincides with the global financial crisis setting in and provoking a global recession. For the preceding three years the numbers were consistently around the 90,000 mark, dropping to 74,615 in 2007-08, much the same the following year, picking up slightly in 2009-10, but dropping again in 2010-11.
Like Mr Grigg, Mr Fry sees the market picking up at present. The park is on track to get more visitors this July than it did last July. As of Sunday they had had nearly 6000 visitors with two weeks to go, while last July they had just over 10,000: "It looks like we'll exceed that."
Mr Fry says his team are always trying to broaden the appeal of the park, to offer visitors what they want. The park's nocturnal tours were established in response to feedback that there was not enough to do at night in Alice. He says the tours, with 25 participants, are "booking out on a nightly basis".
The park's "cultural presentations" also continue "unabated, in response to visitor demand for greater contact with Aboriginal people.

Back to our home page.